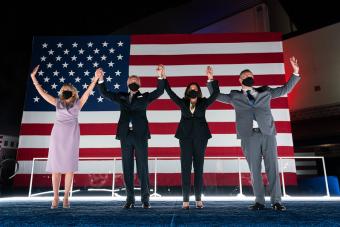 Delaware Democratic Party Chair Erik Raser-Schramm has issued the following statement after Joe Biden was projected the winner in Pennsylvania, reaching the 270 electoral vote threshold and becoming president-elect of the United States:

Today, the battle for the soul of our nation was won with the only weapon that truly works in a democracy: our votes.

These have been dark days in America, but there is new light on the horizon. Delaware kick-started the American experiment 233 years ago, and now it’s our own Joe Biden – buoyed by record turnout – who has beaten back the biggest domestic threat to our democracy we’ve ever seen.

Now, despite all the noise and desperate efforts to cast doubt over this election, Delaware’s favorite son will be the next president of the United States. And the American people will soon inherit what Delaware has long-enjoyed but never taken for granted: a beloved, one-of-a-kind servant-leader that carries the sincerity and empathy required to heal a wounded nation.